We have restructured the business to form a group of companies controlled by a company, Waste Managed Ltd.

Cheaperwaste is now a Waste Managed group company. If you are an existing Cheaperwaste customer you can if you wish change to a new contract directly with Waste Managed Ltd, whose terms and conditions are available here https://wastemanaged.co.uk/terms-and-conditions.pdf

Fashion is one of the most wasteful industries in the world, with manufacturer and consumer behaviour both contributing to a reprehensible reputation.

What is fast fashion?

Fast fashion acquires its nametag through a variation of ‘fast’ practices.

From a manufacturing perspective, the design of fashion is fast to keep up with trends, as is the rate of production to supply demand, and ultimately, the delivery of the product.

The consumer often makes a fast decision to purchase a garment and wears it fast, with both quality and style contributing to items being discarded after minimal use.

The definition of trend, to change or develop, is the catalyst for this unsustainable and wasteful cycle, where consumer and manufacturer endlessly feed the process.

Fast fashion is therefore disposable fashion, meaning there is continuous waste and consequently demand for more.

While recognising the environmental impact of the production of fast fashion, it is impossible to ignore the immediate human effects, with the low price of garments equating to low wages for workers, and often unregulated working conditions.

In July, a Leicester-based factory producing clothing for the likes of online giants Boohoo was likened to a ‘sweatshop’ with the owner confessing workers were paid well below minimum wage.

A clothing factory collapse in Dhaka, Bangladesh killed over 1,000 people working on orders for high-street retailers, with government reports blaming poor construction and a blatant disregard for building codes for the disaster.

Again, to allow for affordable prices, materials are often sourced from where they are cheapest, meaning long-distance travel, often on fuel-guzzling cargo ships.

Once clothing is manufactured in factories, it is transported back to the retailer via road, rail, sky or sea and can even travel full-circle to where the materials were originally sourced.

The factories themselves are often coal or generator-powered, with that, coupled with the excessive transportation, producing enormous amounts of carbon emissions.

According to a report by Quantis, the global apparel and footwear industry accounted for an estimated 8% of the world’s greenhouse gas emissions, with apparel responsible for 83%.

For scale, the amount of carbon dioxide and equivalents the fashion industry produces is almost as much as the entire European Union’s impact.

The fashion industry comes second only to agriculture in polluting the world’s water, with textile dying and finishing processes relying on toxic chemicals that leach out into rivers and ground water systems.

Of course, the industry intertwines with agriculture with the likes of cotton harvested from fields.

The expenditure of raw materials such as water by the fashion industry is also colossal, with around 1,800 gallons of water used to make a single pair of jeans.

And it isn’t simply water usage that is a concern, again, in an effort to keep prices low and desirable, companies often opt for synthetic fibres such as polyester, spandex and nylon, with 60% of clothing made worldwide comprising of these fabrics.

Once washed, the materials release plastic fibres into the water system, with an estimated half a million tonnes of microfibres entering the ocean annually.

These microfibres can enter marine food chains, and recent research suggests we are eating and drinking plastic, and it can even be found in rain.

The fast fashion cycle means production is not the only threat to the planet, with fashion waste an inevitable consequence.

Findings suggest that one in three women feel their clothes are outdated after less than three wears, with impulse purchasing and a wear it once culture due to social media amongst the culprits.

Moreover, an estimated £30 billion worth of clothes hang in UK wardrobes unworn.

This mass overconsumption is facilitated by the ease of buying online, as well as swift changes in styles with many brands updating their ‘new in’ offerings daily.

Affordability means outfits can be replaced effortlessly, with purchase of new items often easier than returning those unworn, but also thwarts those who planned more than one wear with inadequate quality.

The resulting amass of waste not only significantly harms the environment, but both sustains the need for production and emphasises its damning carelessness.

The Copenhagen Fashion Summit found fashion responsible for an annual 92 million tonnes of solid waste in landfill, with Quantis echoing that 60% of all clothing ends up incinerated or landfilled within a year of production.

It also takes hundreds of years for the aforementioned synthetic fibres such as polyester to biodegrade.

What can be done? 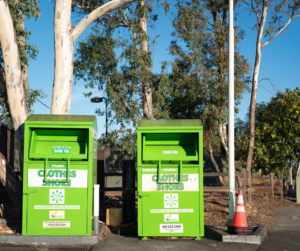 While acknowledgements, particularly from designer and high-end, have been made – note Vivienne Westwood’s anti-landfill call to action and Stella McCartney’s landfill photoshoot – doubts remain over the legitimacy of fashion’s awakening.

Analysis from CDP found that of 62 fashion brands, less than a quarter set targets for the reduction of water pollution, with a mere 6% reporting on progress.

A slowdown of consumer behaviour is also necessary to break the cycle of fast fashion.

Altering choice and opting for garments of a higher quality and avoiding plastic materials provides an immediate impact for concerned customers, with better quality also offering a lengthier lifespan.

Simply washing clothes at a lower temperature and cutting down on tumble drying and ironing will prolong their wear, and of course in turn waste less resource.

If clothes do become damaged, repairing, or taking them to an alteration service rather than needlessly binning them, is considerably more eco-friendly.

What’s more, garments do not need to be repaired to their original form, and can be repurposed or refashioned into something new, and indeed relevant, with the likes of government guidelines on how to fashion a face mask from existing fabrics available.

Of course, donating unwanted clothes to charity is beneficial twofold, with many charities now existing solely focusing on regifting outfits, such as the Meghan Markle supported Smart Works, which provides women with interview dressing and support.

Clothing banks for the aim of reusing, repurposing, and recycling are also readily available across the UK, with the likes of the Salvation Army donation points offering to resell items, with any not deemed saleable reused in countries less affluent overseas.

Likewise, this year Primark committed to an in-store recycling scheme, where shoppers can donate pre-loved items from any brand with the promise nothing would go to landfill, and instead be reused, repurposed or recycled, with profits going to UNICEF.

As long as fashion remains fast, any progress to combat its damage will be slow, but with awareness comes power and with numbers, strength.

If you are a business owner interested or committed to improving your environmental impact, contact CheaperWaste today to see how we can help.

This website uses cookies to improve your experience while you navigate through the website. Out of these cookies, the cookies that are categorized as necessary are stored on your browser as they are essential for the working of basic functionalities of the website. We also use third-party cookies that help us analyze and understand how you use this website. These cookies will be stored in your browser only with your consent. You also have the option to opt-out of these cookies. But opting out of some of these cookies may have an effect on your browsing experience.
Necessary Always Enabled
Necessary cookies are absolutely essential for the website to function properly. This category only includes cookies that ensures basic functionalities and security features of the website. These cookies do not store any personal information.
Non-necessary
Any cookies that may not be particularly necessary for the website to function and is used specifically to collect user personal data via analytics, ads, other embedded contents are termed as non-necessary cookies. It is mandatory to procure user consent prior to running these cookies on your website.
SAVE & ACCEPT