We have restructured the business to form a group of companies controlled by a company, Waste Managed Ltd.

Cheaperwaste is now a Waste Managed group company. If you are an existing Cheaperwaste customer you can if you wish change to a new contract directly with Waste Managed Ltd, whose terms and conditions are available here https://wastemanaged.co.uk/terms-and-conditions.pdf

What Is General Waste Collection?

Although, that being said, in more recent times, general waste can sometimes go to an alternative treatment facility where any useful material is extracted before being sent to landfill. But this is usually very expensive and can only achieve so much. We will discuss more about this later in this article.

What Is General Waste?

General waste is sometimes referred to as residual waste and is the refused material from both businesses and households which cannot be recycled. It is the most common and widely produced type of waste and is largely considered to be harmful to the environment.

How Is This Type Of Waste Disposed Of?

After the general waste is collected, it is usually taken to landfill where it is buried and left to decompose over time (we will discuss this further in the next section). But with the help of modern technology, there are some alternative disposal methods available now such as ‘energy-from-waste’ and ‘solid-recovered-fuel’.

In this process, the general waste is incinerated at temperatures over 1000°C. This creates a gas which is funnelled into a boiler which heats up water to create steam which then powers a turbine in order to create energy. Plus, the leftover ash from the incineration stage is often used in the construction industry.

In this process, the general waste is collected and then shredded. A magnet is then used to separate and collect the ferrous metals in order to recycle them. It then passes through another sorting stage where the non-ferrous metals such as aluminium are removed. The leftovers are then shredded further and condensed into square bales to be used in kilns instead of fossil fuels.

Why Is This Waste Harmful To The Environment?

General waste is harmful principally because it largely cannot be recycled and takes numerous years to decompose in landfill. This is a problem because we have a finite amount of space to bury our waste and so landfill sites are now piling up above the surface. 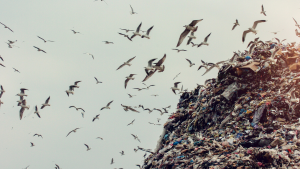 Furthermore, because plenty of food scrapings end up in general waste and, therefore, landfill these sites produce masses of harmful greenhouse gasses such as methane from the decomposing food. This gas, in particular, is very efficient at absorbing the sun’s heat and thus warming the Earth’s atmosphere, melting the ice caps, disrupting habitats and food chains and so on.

For businesses, it is highly recommended to have your general waste collection carried out by a licenced waste management service. They will be able to offer you a new bin (if you need one), collect on a schedule suited to your needs, and ensure that your business is compliant with the UK government duty of care waste regulations.

If you need your waste taken care of then simply fill in the quick and easy quote form below to get a free quote.

This website uses cookies to improve your experience while you navigate through the website. Out of these cookies, the cookies that are categorized as necessary are stored on your browser as they are essential for the working of basic functionalities of the website. We also use third-party cookies that help us analyze and understand how you use this website. These cookies will be stored in your browser only with your consent. You also have the option to opt-out of these cookies. But opting out of some of these cookies may have an effect on your browsing experience.
Necessary Always Enabled
Necessary cookies are absolutely essential for the website to function properly. This category only includes cookies that ensures basic functionalities and security features of the website. These cookies do not store any personal information.
Non-necessary
Any cookies that may not be particularly necessary for the website to function and is used specifically to collect user personal data via analytics, ads, other embedded contents are termed as non-necessary cookies. It is mandatory to procure user consent prior to running these cookies on your website.
SAVE & ACCEPT