It’s the most wonderful time of the year, but Christmas is a climate catastrophe.

Tis the season where overindulgence in every sense is celebrated, from dinners to decorations, and it is an industry typically worth £42 billion to the UK economy.

While the festive season may bring light to what has been a difficult year, the dark environmental impact of Christmastime cannot be ignored. 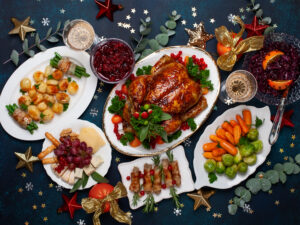 Perhaps the most famous aspect of festive tradition, Christmas permits Champagne for breakfast, with the average Brit consuming nearly 6,000 calories over the course of the day.

From farm to plate to bin, the centrepiece of Christmas Day celebrations is plagued by environmental harm.

Excessive eating during Christmas can cause the same carbon footprint as a car travelling around the entire world 6,000 times, according to a study by the University of Manchester.

And, as stated by a UN report, the greenhouse gas footprint left by the meat industry rivals that of every form of transport – including rocket ship – combined.

The body also noted that the goals of the Paris Agreement could simply not be achieved without a decrease of animal agriculture.

It is estimated that livestock farming is responsible for 18% of all human produced greenhouse gas emissions, and contributes to land and water degradation, acid rain, biodiversity loss and deforestation.

Then, the meal has to reach its consumer, with food miles tallying up further environmental damage.

Even some food that is harvested in the UK can be sent abroad for processing purposes.

After an uproar last decade over supermarket Asda importing frozen turkeys 5,450 miles from Brazil, it is estimated that a Christmas dinner could clock up anywhere between 50 to 90 thousand miles in imported ingredients.

What’s more, standard ovens are 2 killowatt-hours, meaning the typical roast translates into the amount of energy used by burning half a litre of petrol.

And, in the festive feasts final blow, the nation wastes two million turkeys, five million puddings and more than 74 million mince pies over the party season.

Not only does food waste render the prior environmental damage pointless, it also rots in landfill, producing methane – a greenhouse gas around 25 times more potent than carbon dioxide.

But small changes can make the Christmas roast more sustainable – without altering the spirit.

Simply opting for a different, less or no meat on the Christmas spread is one of the most impactful choices for the environmentally conscious.

Thankfully, the festive staple turkey is amongst the least harmful of meats, meaning sticking with the classic is an eco-friendly choice.

Beef and lamb are amongst the worst offenders, with a kilogram of protein from each producing 643kg and 749kg of carbon dioxide respectively.

Opting for a meat-free feast may make the biggest difference, with supermarket Tesco reporting a growing number of customers are switching to a plant-based centrepiece.

If meat isn’t an easy trade-off, simply buying local could drastically reduce the miles chalked up by festive foods.

Opting to cook food differently can also relieve some of the damage caused by Christmas, like cooking meat sous vide, par boiling potatoes and microwaving vegetables.

Reducing portion sizes can also go some way to avoiding the masses of food waste Britain accumulates over the festive period, with freezing leftovers or getting creative with Boxing Day recipes good waste relievers. 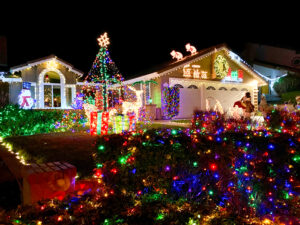 Another Christmastime custom is of course decorating, from trees to lights, the tradition can be dated back to the 15th century.

But much like Christmas dinner, the practice is not without its climate controversies, and all that glitters may not be gold when it comes to the environment.

The focus of Christmas decorating is the tree, with a long-standing debate over a real tree versus an artificial one.

This debate isn’t just for decorations sake, but the environment too, with pros and cons linked to each choice.

While artificial trees have the added incentive of being reusable, they are made from one of the planets greatest enemies in plastic.

Manufacture of the plastic tree is responsible for two thirds of its carbon footprint, with industrial emissions while it is made attributable to a further quarter, according to the Carbon Trust.

And while the longevity of an artificial tree can be its appeal, it is similarly its downfall with fake trees often being non-biodegradable, meaning once they are discarded, they remain in landfill forever.

Artificial trees tend to be transported from the likes of China, travelling thousands of miles, shrouded in packaging, before they reach their destination.

And while the yearly car journey to collect a real tree may be somewhat damaging, it is agreed a real tree is the greener choice – as long as it’s locally sourced.

The real tree also soaks up carbon dioxide during its average ten years in the ground.

Disposing of a real tree is more significant to its overall impact than the aforementioned car trip though, with real trees sent to decompose in landfill producing methane as they rot.

Burning a tree, replanting or having it chipped reduces it’s carbon footprint by 80%.

The artificial tree would need to be reused for at least ten years to have a lower environmental impact than a real one.

Dressing the tree is how most welcome in the Christmas period, with branches adorned with lights and baubles.

Houses are also embellished in lights, with NASA observing parts of the Earth shine up to 50% brighter during Christmas and New Year.

While this may seem magical, it isn’t without environmental cost, with light pollution wasting energy, washing out stars and disrupting nocturnal wildlife.

Furthermore, The Energy Saving Trust report an extravagant lights display can cost as much as £210 to power during the 12 days of Christmas, producing enough carbon dioxide to fill 95 telephone boxes.

One easy environmental win over the holidays is to switch to LED lights, a swap embraced by those responsible for the iconic New York Rockefeller tree.

LED lights require up to 80% less energy than regular Christmas bulbs, converting the vast majority of energy into light instead of heat, they also therefore illuminate brighter.

Along with investing in LED’s, swapping plastic baubles contained in plastic packaging for recyclable, homemade or edible decorations will be greener alternatives. 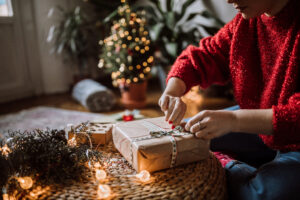 For the selfless among us, giving is the true essence of the Christmas period.

From the three wise men gifting the baby Jesus gold, frankincense and myrrh – their offerings were perhaps more environmentally savvy than those of modern day.

One of the issues with Christmastime gifting is the spirit of the season itself, indulgence.

According to the Bank of England, Brits spend an additional £800 on average in December, a habit only exacerbated by the introduction of Black Friday and Cyber Monday just days before.

The Manchester Evening News last year expressed parents’ concerns that Christmas was becoming a competition, with sights of hordes of gifts under trees common on social media.

While spoiling one another may be customary at Christmas, many of the items gifted simply end up as waste, and ultimately, in landfill.

Many children’s gifts also contain batteries, a small necessity with a large carbon footprint, both in creation and at the end of their life, where they release toxic chemicals into the environment.

The items bought are also often shipped, flew or driven across many miles before they reach their intended recipient.

What’s more, they tend to be wrapped in both plastic packaging and another of Christmastimes foes – wrapping paper.

Much of the gift wrap used for Christmas cannot be recycled and ends up in landfill, especially paper containing glitter.

The entire concept of wrapping paper, torn to shreds in seconds and thrown away, is indeed wasteful.

Similar to gift wrap, according to the Greeting Card Association Lobby Group, the UK sends almost a billion Christmas cards a year, most meeting the same fate as the gift wrap.

Again, small amendments to festive practices can have positive impacts, such as simply giving less gifts.

One more poignant gift as opposed to many, or organising a Secret Santa amongst friends and families can both significantly reduce the amount of Christmas waste produced year after year.

Dreaming of a Green Christmas

Christmas may be our most precious tradition, and thus harder to alter.

But ultimately, Christmas is the season of goodwill to all and peace on Earth, so perhaps we owe it to Christmas to make a change for the greater good.

Are you following us on Twitter? We’re using December to showcase our #12TipsOfChristmas to help you enjoy a #GreenChristmas.

Any cookies that may not be particularly necessary for the website to function and is used specifically to collect user personal data via analytics, ads, other embedded contents are termed as non-necessary cookies. It is mandatory to procure user consent prior to running these cookies on your website.